Don’t let the cartoonish look fool you. Super Mega Baseball 3 has exceeded all expectations and has become the best playing baseball game on the PC.

Super Mega Baseball 3 from Metalhead Software is not only the slickest-looking game to date, but it’s also one of the most fun to play. From its awesome animation to the homer-jacking action, SMB 3 is this year’s world series contender.

The best playing PC baseball game of the season, SMB 3 slides into home plate with an extensive list of options. Players can choose between intense Arcade, Simulation, Franchise, and can Customize their own leagues and play against other players through cross-platform Pennant Race Modes. Whichever you choose, the onfield action will give diehard fans and baseball newcomers an addictive, variety-filled game that’s destined for Cooperstown.

There are a few drawbacks, however, one is the lack of MLB and MLBPA license which hinders the experience slightly, but the modding community has stepped up and should have an official player roster ready to download by the time you read this. The second shortcoming is the absence of instant replay, which does not impact gameplay but would have been a nice little feature to go back to and create some awesome highlights with. 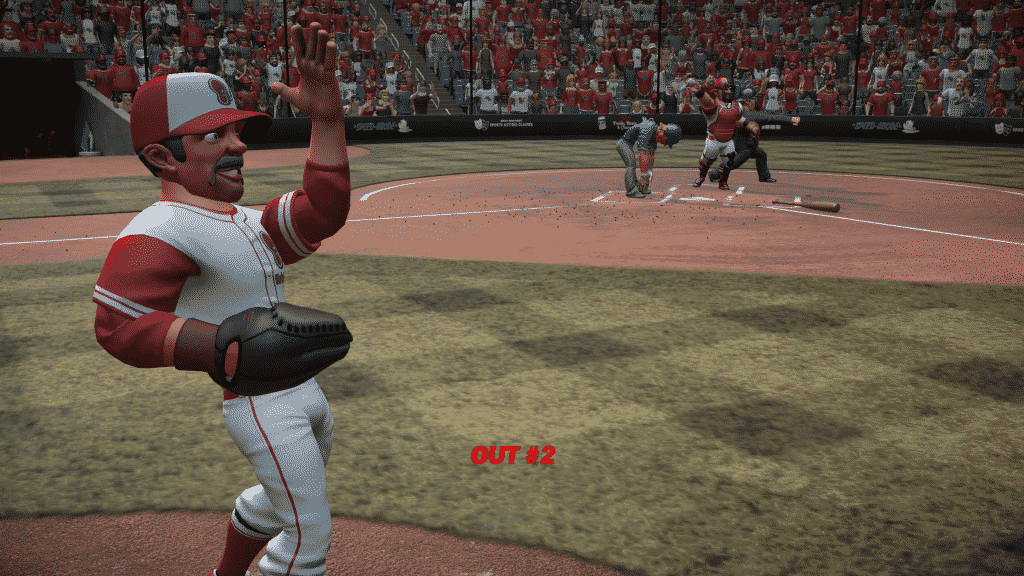 Mix up your pitches especially against power hitters. They will almost always swing at anything.

Despite the omission of the MLB license, it’s the grand slam gameplay and special player abilities that ultimately make it the best in the field. The pitcher/batter confrontations are highly heated strategic encounters where a hurler’s accuracy and a slugger’s hot zone need to be factored in before every pitch. At the plate, you can either try to slap the ball past the infield, bunt or crush a towering homerun using the power swings.

On the field, the player control is extremely intuitive: you can run, dive, and jump to nab any would-be home runs. An indicator is used to determine the speed and accuracy of your throws. If you’re throwing when the indicator is in the red, for example, it will result in a bad throw or it will pull your player off the bag during close plays. Other little touches like broken bats, pitchers scratching their behinds, and fielding errors add to the already pleasurable playing experience.

Swinging for the Fence

Overall, Super Mega Baseball 3 for the PC is this season’s MVP, delivering stylish good looks and clutch, true to the game action. It may not have the real players or real stadiums, but the comprehensive and robust gameplay definitely make up for it. There may be baseball titles out there with more flash, but SMB 3 offers more game for the buck. It is the best baseball experience on the PC by far and a must-buy for all sports nuts out there.

← Covid the Outbreak - It's Gonna Be Contagious Journey into the Dark Below in Necromunda: Underhive Wars →