The ultimate sidescrolling beat’em up is back and better than ever! If you’re a fan of the series, you owe it to yourself to buy this game!

Have you been craving for a hot fisted fighting game just like the ones from the early days of gaming? Well, you can start popping the champagne and throwing up the confetti because one the greatest side-scrolling brawlers is now on the PC and it kicks some major butt!

If you’re not familiar with the Streets of Rage franchise, here’s the rundown: During the early 8 and 16-bit era, the fighting game formula was used everywhere, including in the arcades and pretty much every home console available. Not wanting to be left behind, the two biggest names in video games also wanted their piece of the lucrative pie. Nintendo snagged the rights to the arcade hit Double Dragon in the late 80s while Sega countered with Alien Storm and Golden Ax. By the 1990s Sega introduced Streets of Rage to a fist-pounding audience, and the rest, as they say, is history. 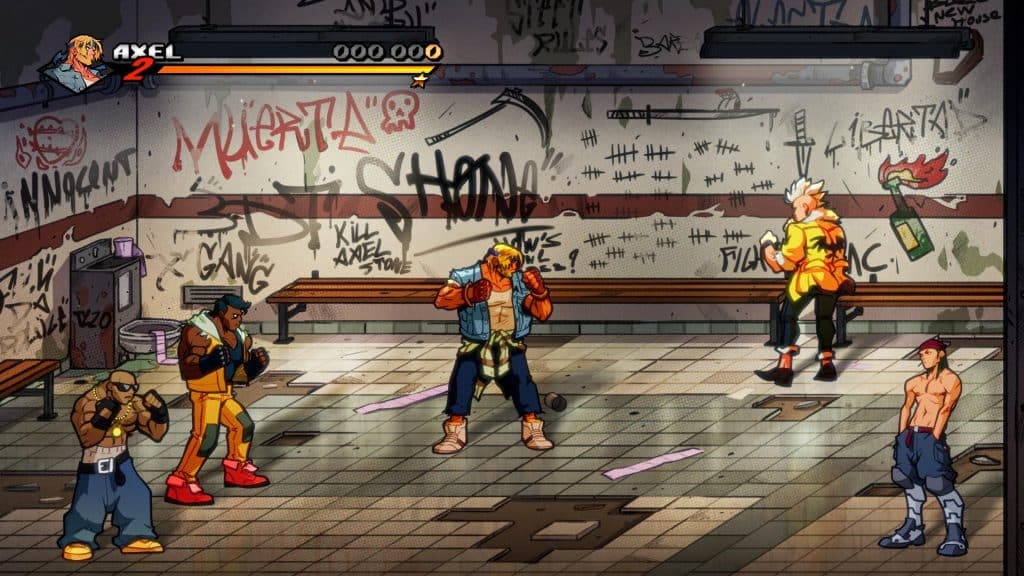 Don’t stand in one place for too long or you will get surrounded and pummeled.

Streets of Rage 4 starts after the defeat of the nefarious Mr. X nearly two decades ago. Unbeknownst to the residents of Wood Oak City, a new crime syndicate has emerged to once again, cause havoc and destruction. This time, the gang is being led by Mr. X’s offspring, the infamous Y twins, whose plans are to finish up what their old man could not.

But don’t expect this hostile takeover to be easy – not when the city’s most famed residents have something to say about it! With over 12 levels of fist-pounding action, you’ll take the fight on trains, planes, elevators, and of course in the sleazy wind-blown streets. You can choose to play with old friends like Axel, Blaze, and Adam Hunter. In all, there are about four characters to try out and a few more to unlock.

So you wanna fight?

Each character brings with them an arsenal of hand-to-hand fighting techniques, including martial arts, boxing, and judo. Weapons like knives, bats, and crowbars can be picked up and used to do double the damage. But regardless of which character you choose, one thing is for sure: they are ready to lay the beat down on anyone that gets in their way!

But if it’s a fight you want, it’s a fight you’ll get because the syndicate’s henchmen come at you in relentless droves. SoR 4 is jam-packed with moves that help you escape some precarious situations, and you’ll need to use every one of them. You must figure out the best way to outthink these low life punks and gun-wielding thugs. The bosses will give your ego a bruising as well if you’re not careful. Thankfully, you have an arsenal of combos, juggles, and multi-hit attacks that can pulverize your enemies. A new gameplay feature is the Star Move that does massive damage to multiple enemies at once. These moves can be performed after collecting star icons hidden throughout the levels. 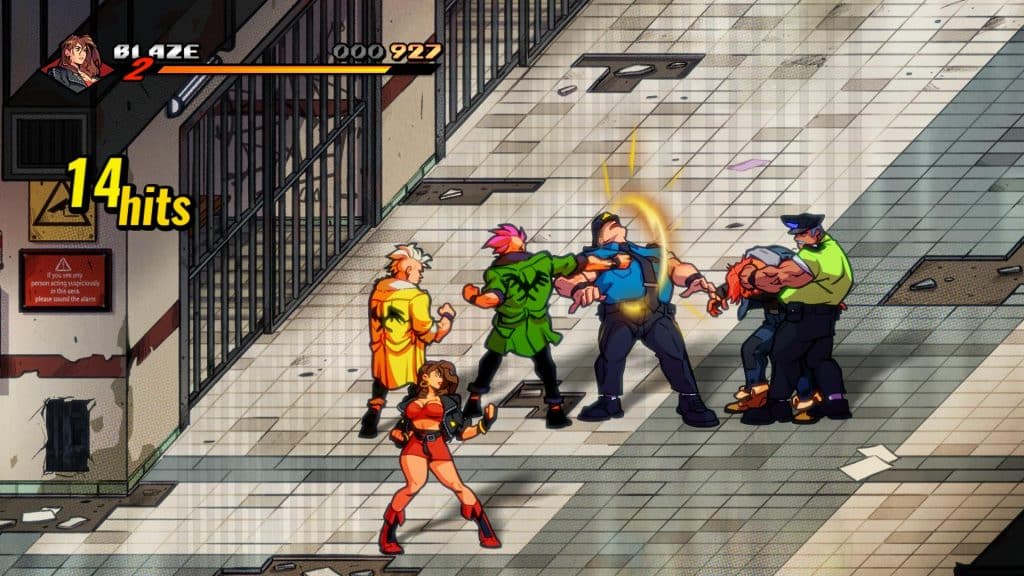 Stand back and look pretty while the creeps and police fight it out!

The fights are familiar, fun, ferocious, and stays true to the series. The difficulty, even on Normal, will knock out even the toughest of players. Thankfully, you can play with a friend in two-player mode or with four players locally. The multiplayer features make the game much more satisfying and manageable especially when you’re only given limited lives to start with.

The graphics this time around are superb displaying vibrant splashes of colors, dazzling effects, and fluid animation. I’m certainly glad the developers opted to upgrade the visuals to the modern age and not keep things looking so retro as with most games making a comeback. The audio raves on the strength of Yuzo Koshiro’s now-famous techno-rock tunes. Despite a few AI quirks, this game is everything I hoped it would be. As a kid, I grew up playing Streets of Rage on the Genesis, and playing this latest installment brings back all those wonderful memories of a bygone era.

← R.B.I. Baseball 20 PC Review - Arcade Fun But Realism Still Strikes out What Happened Is A Psychological Thriller That Takes the Player to the Edge of Madness →