One of the best arcade classics of all time gets a modern-day facelift. And you know what? It’s pretty good!

A barrage of missiles rains down upon the six great cities of the world. It’s up to you to intercept them and save the human race from mass extermination. If the premise sounds familiar, that’s because it should be, at least if you’ve ever laid your hands on an Atari system or dropped a quarter into the arcade machine. Missile Command: Recharged is yet another classic title that’s been reimagined by the folks at Nickervision Studios and Atari to fit the current retro craze.

Just as in the original, your goal in this remastered version is to simply survive wave after wave of enemy onslaught and score as many points possible. To accomplish this, you must defend your cities against enemy fire that’s attacking from the top of the screen. Sounds pretty easy, right? Well, it is at least in the beginning. As you progress further, missiles, smart bombs, and enemy craft barrage you from every direction and at a much faster pace. Luckily, you’re armed with some serious weaponry to blow up any incoming attacks. There are also much-needed power-ups that randomly fly across the screen to help you out when things get out of control. Unfortunately, the ability you gain from using them doesn’t last long enough to warrant trying to shoot them down, especially when you have a cluster of enemy missiles just inches away from one of your cities. Sometimes, it’s just better off to focus fire on the incoming missiles. 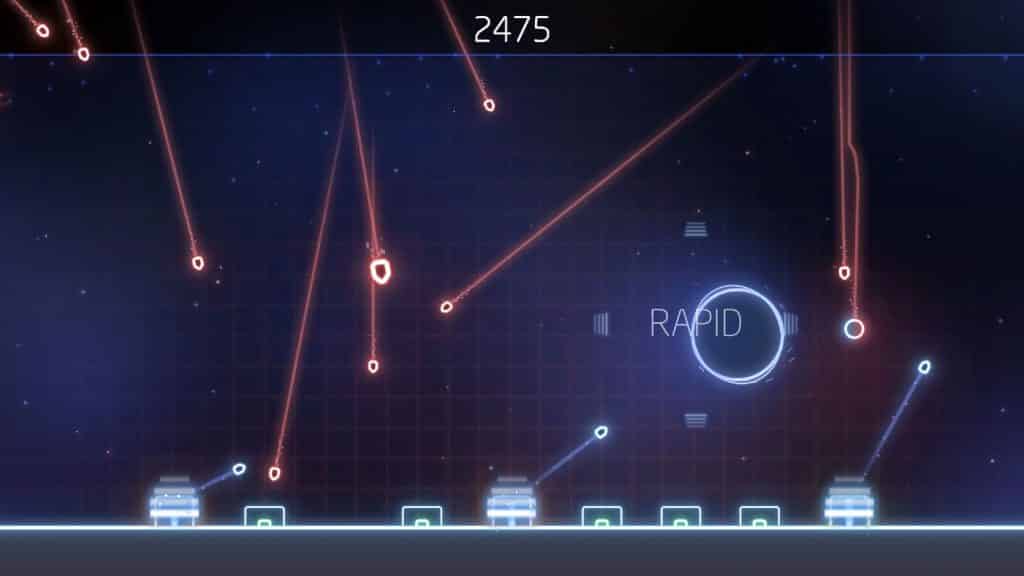 Focus on saving just a few cities instead of all six, especially in later rounds

Haven’t I Seen You Before?

You score points by destroying enemy weapons and for the number of missile silos and cities, you have left. At the end of each wave, your score is converted to points which you can spend on specific upgrades, such as Reloading, Speed, Power, and Rebuilding. Sadly, you can only maximize your upgrades to Level 6 which you can reach within an hour or so of playing. This limitation really hurts the replayability and I wish the developers had opted not to limit the level capping so we could continue playing the game upgrading whichever category we wanted indefinitely.

Graphically, the game looks good with hefty uses of bright neon colors. I would have preferred the cities look more like real cities instead of like blocks and that the landscapes had more detail and animation to it. Control, however, is exceptional with the mouse being so much more accurate and precise than any trackball device could offer. The music and sound effects aren’t anything special but they do keep the action going with its retro-inspired soundtrack.

In the end, Missile Command: Recharged keeps the classic concept intact while offering just enough features to keep it interesting. While most games ease you in at a slow and methodical pace, this one doesn’t. Right from the get-go, you’re constantly on the defensive, strategizing to figure out if you should save all your cities or just focus on saving a few. It’s this blend of arcade shooter/thinking man’s game that has endured gamers to Missile Command for almost 40 years. If you want to relive an all-time classic, this one is a no-brainer.

It’s a milestone year for video game characters who made their debut in 1990 – they’ve been around for more than three decades which is a long time in video game years!