If you’re looking for a unique fighting game reminiscent of the ’70s martial arts movies, Shaolin vs Wutang 2 is just what you’ve been looking for.

Considering the lack of fighting games on the PC that even comes close to the fast action and quick control of console brawlers, you can imagine how difficult it might be to clearly judge one that, even though it’s the best indie fighter for the PC, simply doesn’t stand out among better titles on the home systems

That being said, Shaolin vs Wutang 2 is by far be of the best and most unique fighting game you could possibly get for the PC. You select from one of 18 fighters, each with their own unique fighting abilities, and go at it mano-a-mano against the CPU or two-player co-op. We actually reviewed the first two games, Shaolin vs Wutang and Fighters Legacy, several years ago when it was still under the Jae Lee banner, so we knew what the franchise was about. 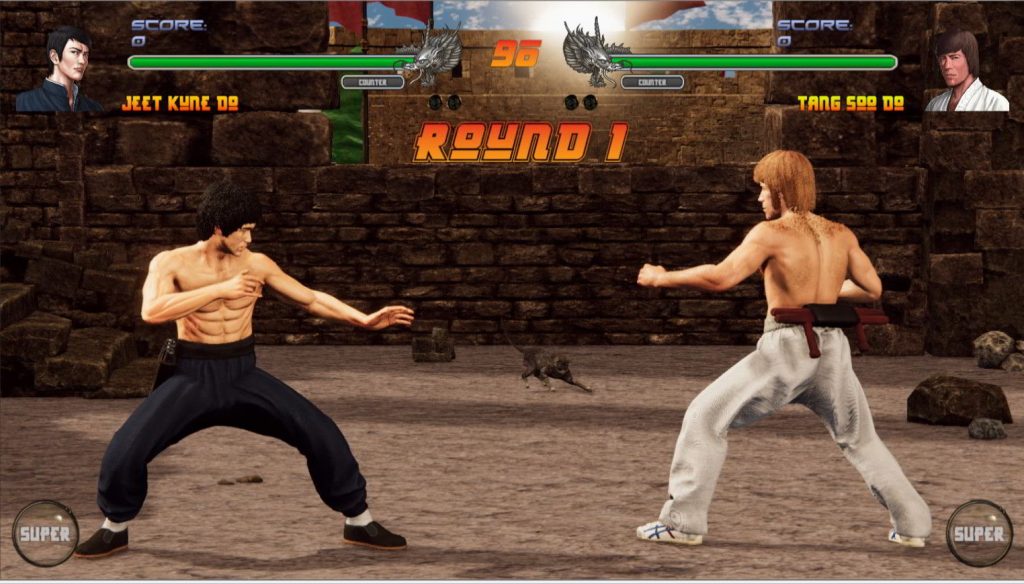 Chuck may be fluid like water, but Bruce is Wataa

Luckily, some things about Wutang vs Shaolin 2 keep it from being just like any other fighting game out there. For one, each fighter represents a specific fighting discipline that takes you all the way back to the goofy Black Belt Theatre shows of the ’70s. Remember the drunken fist fighting technique? How about the snake in the grass or lizard style? If you do, then you’ll enjoy reliving those moments within the game. The fighting engine plays well and is relatively fast-paced. Each fighter has a respectable number of moves and despite a few animation glitches, the fighters move and react like the real thing.

Far and away, the most striking feature of the game lies with the impressive visuals and unique fighting styles. The graphics are really nice to look at and considering the game was developed by just one guy adds even more credence that the best games do not always come from big-name developers.

The high-resolution graphics are sharp, fluid, and smooth. Although Shaolin vs Wutang 2 may not compare in complexity to some of the fighting games on the PS4 or Xbox1, it does enough on its own merits to make it a worthy purchase. Add to that the responsive controls, impressive soundtrack, and a price point of just under $20 dollars, and you got yourself one heck of a kick-ass game.

← 8 Things You Probably Didn't Know About Street Fighter This August, You Will Believe In Hell →

We love games. You love giveaways. Here’s our spooky gift to you this spooky season. Happy Halloween, from us to you!

A fantastic first-person shooter that delivers the fun in real-time. If you enjoyed the Serious Sam series, you’ll enjoy this even more.

The Guise is a Sweet and Fun Surprise

So far, The Guise is an amazing game. Its simple controls, charming story, and flexible level design make it an amazing metroidvania pick-up.

The Long-Awaited “Metroidvania” is Available Now On Steam!