Weapon Hacker is a fun-filled exploration/shooter that brings a multitude of weapon combinations ensuring that you will rarely play the same level twice!

Despite the simple graphics, Weapon Hacker by indie developer Luke Rissacher, is actually a fun little rogue-lite platformer. Granted, much of the fun comes from mercilessly taking out enemy monsters with a multitude of weapon upgrades and combinations ranging from simple pew-pew lasers to what-the-heck-did-I-just-create monstrosities. Beyond that, the goal is to explore three massive areas figuring out the best plan to escape which involves blasting doors, breaking down barriers, and triggering switches. Along the way, you’ll encounter myriads of enemies intent on stopping or killing you whichever comes first.

The weapon upgrade system is the obvious draw in the game and with good reasons. By combining upgrades and enhancements you find along the way, you can augment your weapons to be as devastating as possible. But doing so requires energy that comes from batteries that must be located throughout the map. One drawback is that you only have several slots to use per upgrade, so you may have to drop one object for another to pass certain areas, which is cumbersome but adds layers of strategy to the game. 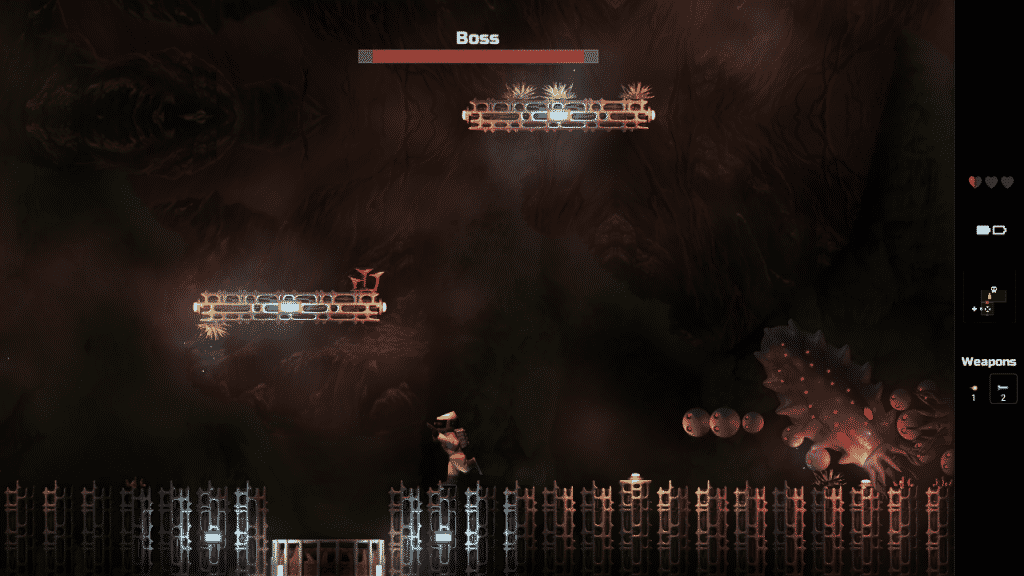 Make sure to upgrade your weapon before going head-to-head with a Boss. If not, it’s going to be a long day.

Navigation is made easy with intuitive and precise controls and an off-screen map which helps to locate hidden areas as well as portals to travel from one location to another with ease. The portals are essential because it helps you traverse the areas quickly without getting bogged down by having to repeat or clear out rooms you’ve already passed through. It is an intelligent design that keeps the flow moving and prevents it from becoming stagnant.

Graphically, Weapon Hacker has the standard Metroid-ish look to it but with more vibrant colors, cool effects, and some unusual looking enemy monsters. The little pupae looking worms that scuttle the cave floors and walls remind me of the Face Huggers in Aliens. God, I hate those little suckers.

One Gun. A Million Ways to Die.

The few negatives I have with the game is the repetitive music and the lack of replayability. Almost everything a player can learn is mastered in the first 30 minutes or so. By the time you’ve reached the one hour mark, you’re pretty much flying through the game without too many problems. Thankfully, the game offers a fair deal of challenge and mind-scratching puzzles to keep you entertained for a good while.

Overall, I enjoyed my time with my little yellow-suited buddy. It’s definitely a casual game that pays homage to the rogue-style gameplay of Metroid. It ain’t fancy, but with its smooth control, consistent challenge, and fast action, Weapon Hacker is just the game to fill your gaming day with.

← A Look Back: DieHard GameFan Magazine 1994 The Theme Park to End All Theme Parks →