TL;DR: Clan N offers up a unique and challenging little brawler set in mythical Japan. If you ever dreamed of being one with the Samurais, here’s your chance!

Indie developer Creamative latest offering, Clan N, takes the retro-inspired beat ‘em up and combines it with just enough strategy and finger-numbing action to offer a long-term challenge to even the most die-hard gamers. With your own personal clan by your side, you fight throughout seven huge levels in beautifully, unblemished environments. Your goal here is to fend off the dark forces trying to take over your home and to banish the evil-doers once and for all.

Starting with your small team comprised of up to four players, you have to navigate your way through level after level in various stages to send your heavily armed foes to their screaming deaths. A level won’t end until either every single one of your enemies or your clan is wiped out. The action is fast and furious and each level requires a different approach if you want to make it through with your head still intact. Enemies come in different forms and sizes and are easily distinguishable while attacking you in various ways. The archer, for example, takes shots at you from a distance while the ninja and swordsman charge at you head-on without remorse. Thankfully, your character is equipped with evasive maneuvers to even the odds. Downed enemies will occasionally drop potions, money, or food that you can consume to restore your health during intense battles. 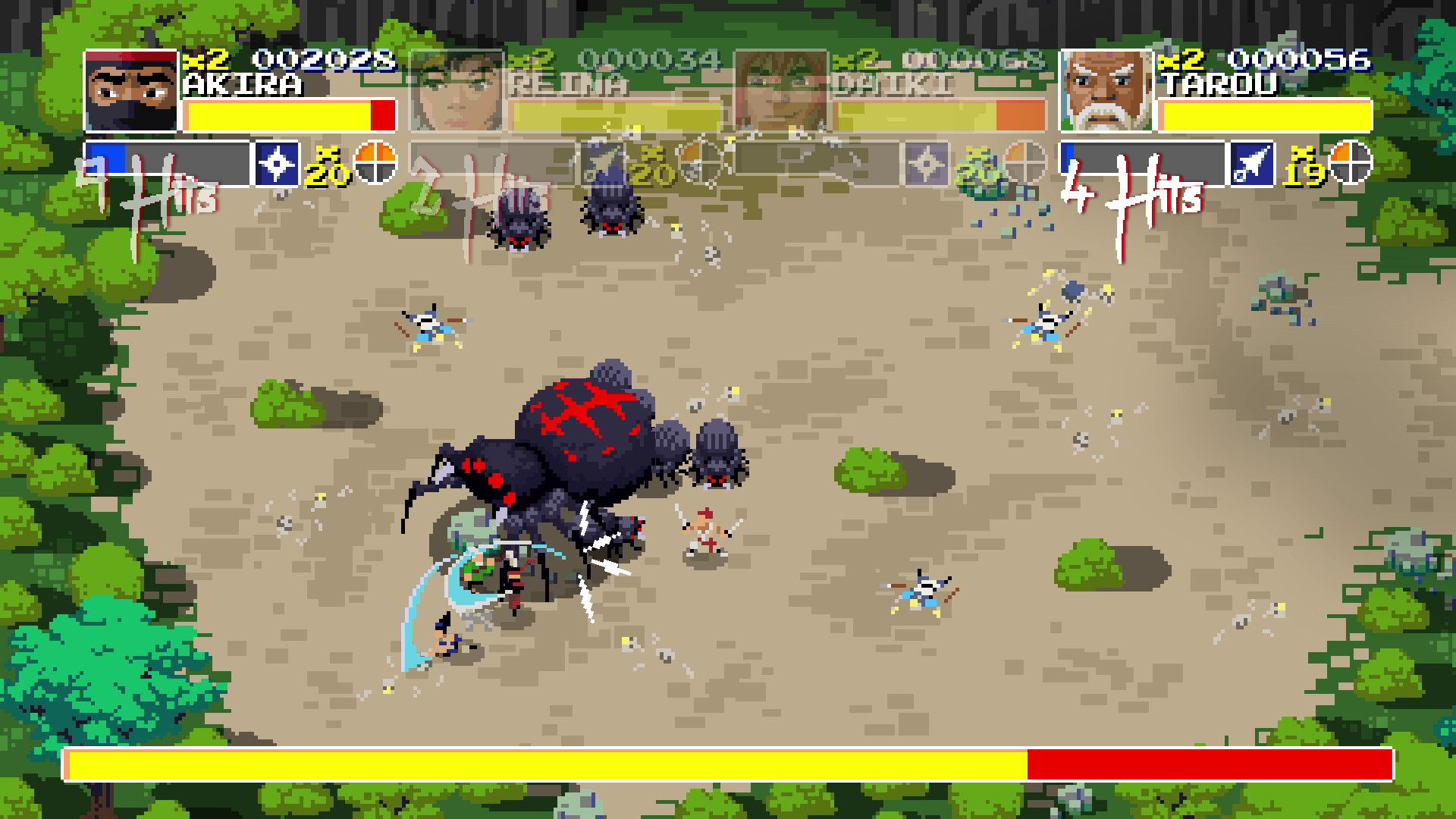 This spider is the first boss you’ll encounter. And yes, she’s always hungry.

Part of the game’s appeal is that the challenge ramps up the farther you get so be prepared to keep smashing those buttons because there’s always a flow of bad guys waiting for you. While some players might complain that the game’s balance is unfair, I say the difficulty curve is nicely judged as you get numerous options to continue, and being killed only means you resurrect in the area where you died and not back to the beginning of the level.

Graphically, the game is very imaginative and pleasing to look at, especially if you’re heavy into pixels. The characters themselves are small but carefully drawn with fighting moves that are well depicted. Sound and control do a nice job of pulling you into this strange but fascinating world of Japanese folklore. While I found the game to be instantly enjoyable, others may find it not all that varied and after you’ve bagged a few levels under your belt, the gameplay becomes rather repetitive. Another downside is that in order to get much of what’s so appealing about Clan N, you really need to play it with friends because by doing so, you up the fun factor and re-playability considerably.

Unfortunately, as I write this, I was only able to hook up with one other player in a handful of games, even with Steam Remote Play enabled. Still, with it’s simple but addictive gameplay, Clan N is the perfect game to leisurely waste time on as it feeds on the three guilty pleasures of gaming: it’s fun, it’s quick, and it’s satisfying. It may not be perfect, but it’s a pleasure to play nonetheless.