Black Future ’88 proves that you can take an old side-scrolling formula and make it unique and refreshing again.

Side scrollers have been considered one of the lamentable carry-overs from the early days of gaming. Not only have we’ve seen this style of gameplay during the 8-bit days, but we continue to see them with mediocre regularity. The reason? By and large, it’s one of the easiest genres to program, and both publisher and developer have abused this matter with hordes of lousy platforming games that have poisoned the genre.

But if the efforts of indie developer SUPERSCARYSNAKES are any indication, then this workhorse of a genre still has some life left to it. Their challenging and innovative game, Black Future ’88, reminds us that any genre can be revived if you put in enough care and creativity to it. The premise is as follows: The world is reeling post a nuclear fallout caused by a demented architect by the name of Duncan.

You play as one of five characters tasked with taking this bad boy down. Sound easy enough, right? In theory, it should be, but in the world of video games, nothing is easy. You see, Duncan, is holed up at the very top of a tower and your job is to climb to the top -literally- and take this nut case out once and for all. 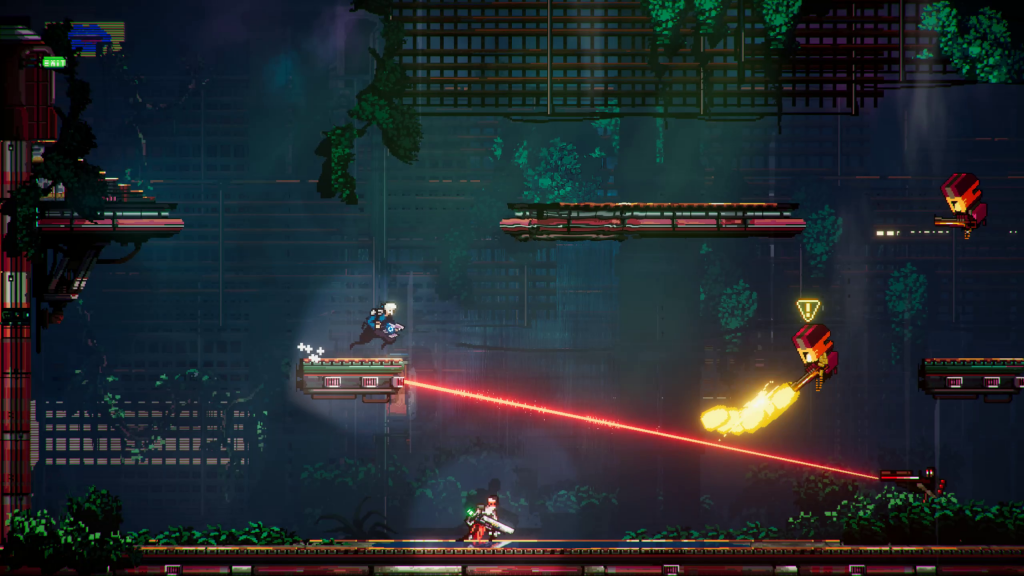 The goal of the game is to get to the top. So just keep jumping!

I’ve heard many impressions about the game from people who have played it, and some have even gone so far as to say it combines every genre of gaming into one incredible experience. While I do agree it offers a unique twist, it doesn’t nearly go that far. Black Future is a side scroller in the truest sense. Just as in nearly every platformer since the beginning of time, you’ll run, jump, shoot, and sneak through traps as you gradually make your way from one end to the other. The interesting design here is that instead of going left to right, you’ll be heading left then right, then straight up.

The concept isn’t unique, but the care and attention paid to this simple formula are what makes the game such a treat. Instead of a traditional health bar, your character’s life is determined by the time it takes you to complete a level. Once the timer runs out, the timer in your character’s little heart runs out as well. But fear not, you’re given an enormous amount of weaponry that would make most third world countries wet their pants. From lasers to missile launchers, to swords, axes, and cannons, you’ll be well-armed to take on any of the minions Duncan tries to throw at you.

Although Black Future’s platforming design isn’t terribly original, it makes up for it in sheer production value. The actual level designs are impressive and you can expect to find a good mix of traps and puzzles that will allow you to get past a level without too much frustration. Again, the storyline is paper-thin, but compared to other games of this genre, it’s a welcome addition that is tied into each level quite well. As you progress further into the game, the simple story contributes to a genuine sense of progress each time you move forward and up. Additionally, the graphics help give the game incredible charm that, quite frankly, hasn’t been seen in a side scroller in some time. Black Future ’88 boasts impressive colored lighting effects, solid character animation, and smooth transitions between level to level. Even better, the artistic design of the environment and the backgrounds is delightful. The charming characters combined with the perfectly matched soundtrack had me excited from start to finish. This was one of the few titles where I knew that review or no review, I had to finish this game.

As enjoyable as it is, Black Future is not without its share of problems. First, the boss fights can be a real pain in the butt if you don’t pick up certain weapon drops before the encounter. Second, the visuals are awesome, but not the clutter. Everything whizzes by you followed by huge explosions that oftentimes make it difficult to follow where your character is. Third, you can play via co-op but I was never able to connect with friends due to the game locking up as soon as anyone joined in. Thankfully, the single-player experience ran flawlessly. Despite my nitpicking, I really enjoyed my time with this game and have high hopes that we will see a sequel in the not so distant future.