Armed to the gears review – Armed and semi dangerous

Armed to the Gears is a linear game but filled with enough action to make it a solid title.

Ah, the joys of a straight-up, balls to the wall action game. Deonn Software brings it all together with Armed to the Gears, an unabashedly action-focused isometric mech shooter set in an extremely cool dark world. You won’t find too much of a storyline here, but you really don’t need it because the gameplay sports some of the best robot mayhem around.

Taking the role of a 60-foot tall biomechanical beast, you’ll fight your way through huge industrial and military war zones to defeat a maniacal regime that rules with an iron fist. The game does a good job of setting you within a living city by including detailed landscapes, dilapidated streets, and abandoned buildings as you trade rockets and machine-gun fire with an army of enemy robots, tanks, and ground troops. Armed to the Gears sports mission-based levels that assign you specific objectives like completing key missions or defending your base against an onslaught of enemies. Many of the levels are commendably large and capturing reactors grants the player Energy Points which can be used to call in air support or to fortify a position with offensive and defensive weapons. 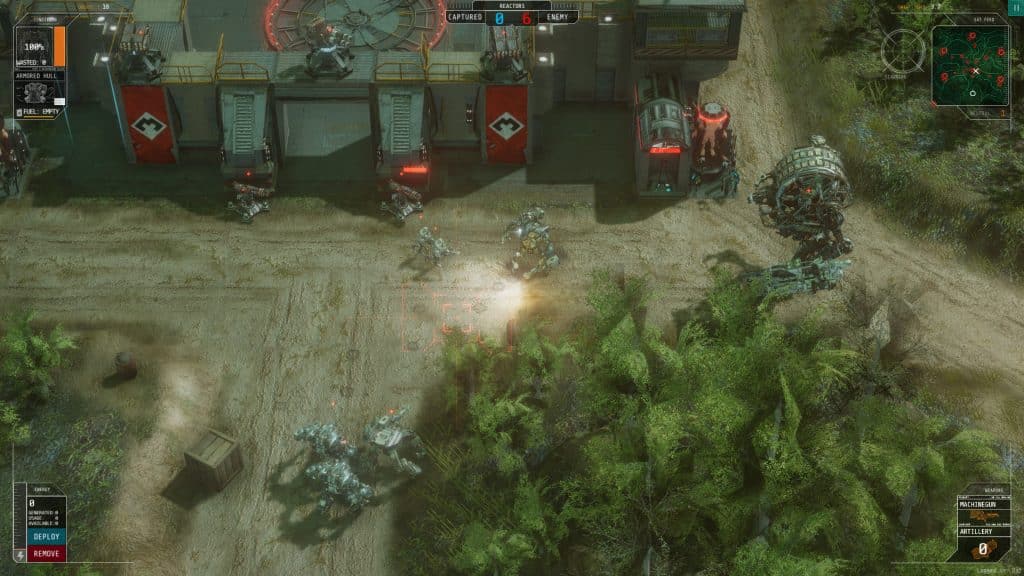 See that big mech at the end? Don’t worry, he goes down pretty quickly.

Graphically, the game looks really good with vibrant colors, exceptional lighting, and tons of special effects. Explosions are put to good use especially when you blow up the bigger bosses later in the game. It would have been nice, however, to see civilians running around or having the battlefield littered with hulking pieces of metal and debris, especially after a long-fought battle. Robot animations are nicely done and the different designs give each mech an ominous but sporty look. Sound effects are top-notch and the tunes are generally better than your typical gaming tracks.

Taken at face value, Armed to the Gears is a very well done single-player title, but therein lies the problem that most gamers are going to find substantial. You see, Armed to the Gears has no multiplayer mode whatsoever, which is a real shame since the detailed environments make it a perfect setting to stomp through in deathmatch or in a game of Capture the Flag. In this day and age, I find this omission very odd even from a start-up indie developer.

Despite the lack of multiplayer support, Armed to the Gears fast-paced, frantic action is engaging and the environments you battle in has a distinct cyberpunk look that will appeal to many. The level design, while linear is entertaining, and with a price point of just under six-dollars, it’s not going to break your wallet. The game might not be as deep or as innovative as other mech games in the market, but if you want to have a good time by yourself, especially when we’re all home isolating, Armed to the Gears is definitely worth a look.