If development continues, the game promises to be fun, and backing it up could help turn it into an amazing coop/multiplayer RTS game. But if you get it, realize that it IS very rough around the edges.

Developed by Daedalic Entertainment, A Year of Rain is a real-time strategy/base building coop game where you can team up with friends and fight with and against the AI or with and against other players.

Daedalic Entertainment has developed a lot of amazing games, unfortunately, although I liked it, I can’t say A Year of Rain will make my favorites list just yet. Don’t get me wrong, the game is not bad. The world seems fairly decently developed, the story follows three different factions all with their own structured characteristics, the campaigns are, albeit overly linear, still quite engaging in their story (although not all factions seem to be currently available for campaigning), and you get to choose the level at which you play, and what type of player you are (tank, damage or support), all of which are nice additions.

The gameplay is rather typical of the genre: build your base, gather resources in order to build more and make more troops, protect your base, and send your troops to fight the bad guys. Gameplay remains mostly the same whether you’re doing the campaigns against the AI, or fighting against other players in the multiplayer PVP. But what A Year of Rain pushes most is their co-op, 2 versus 2 gaming system. Most campaigns give you, at one point or another, an ally to work with. 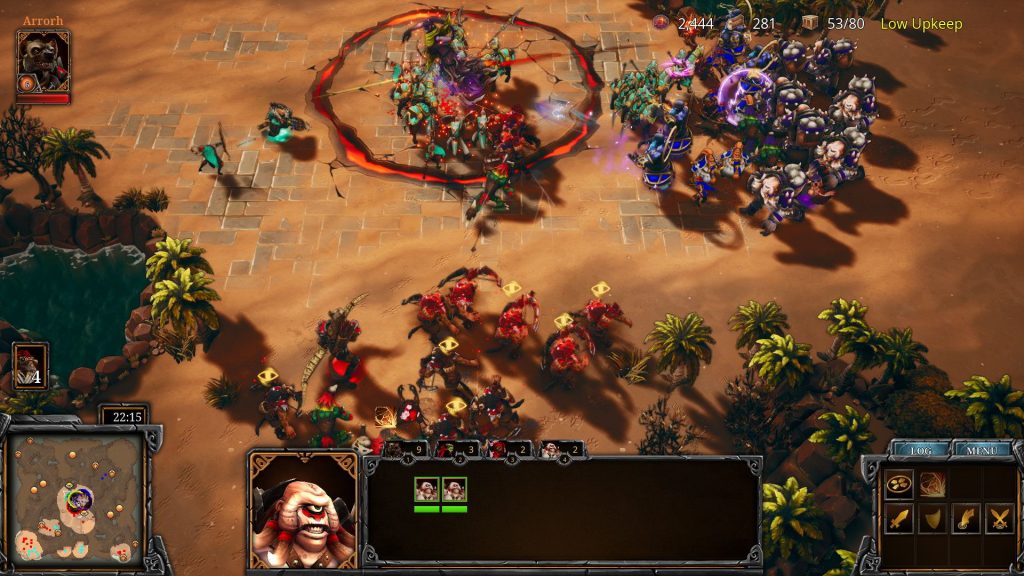 Use flanking techniques against more powerful enemies when possible.

All Wet and Soggy

The strongest points of the game have to be the music and the art. The music score was brilliant, the orchestral sounds seemed to fit the fantasy world perfectly and carried you into the story without ever being tiresome. And if you’ve read any of my previous reviews, you might know usually music is the first thing I turn off in games because it just becomes annoying, too quick. Not so with the soundtrack here. I rather enjoyed having it in the background as I played.

There is also voice acting in the game; it’s very well done but has the unfortunate downside of getting annoying when they repeat the same things over and over as you click on and move your heroes and troops. This, unfortunately, is the downside with all games of this style. But the voices were pleasantly done and seemed to match the characters’ traits perfectly. The art is very detailed; the world and map, though extremely linear, perfectly designed and the settlements and decorations around all done with great care to make it fit.

However, although the art was fantastic, there was not much interactivity with the environment besides things necessary to advance the plot of the campaigns (such as rebuilding a bridge). It felt like a wasted opportunity to have some more interactivity and give some bonus items along the way – something very basic other games of the style do quite well, and that would reward you for exploring a little more. Yes, there were one or two chests lost in the map if you explored, but it felt like it was minimal interaction. I could have overlooked the lack of general environment interactivity if it had been my only complaint.

A Year of Pain

The worst point has to be the AI of the troops. Oh dear, that pathfinding! It was alright during the tutorial levels with smaller units, but the moment your troops grew past a handful, they started getting stuck in just about every crease and turn from the terrain. Trust that if there was a wall, person, or anything in between them and the target location, they would get stuck on it. If two other people were before them attacking an enemy, half of the ones you ordered would choose to stop and do absolutely nothing rather than circle around the enemy to attack from behind, where, mind you, it was quite clear to do so. 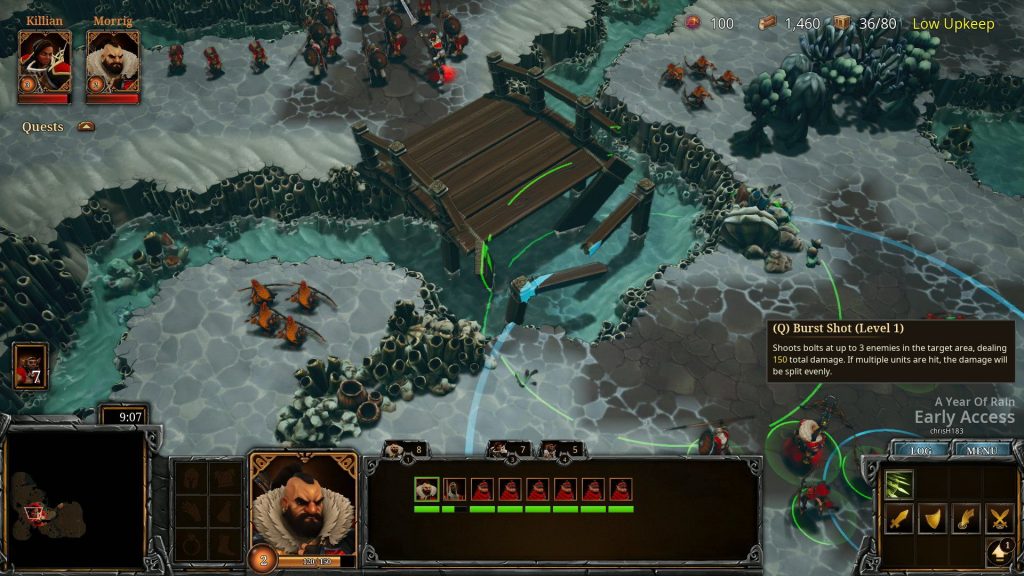 Never start a battle without all your forces close by.

The pathfinding made it near unplayable at sections, because you could not properly separate your troops and leave them walking to a post while checking on another, without coming back to find only 3 out of the 10 actually made it and the rest are now stuck somewhere along the way or have just outright given up. Having to baby them at every step of the way was simply annoying.

As if that wasn’t enough, sometimes either your characters or the enemy characters would just stand around just taking the hits without doing anything. But even more annoying was whenever the game decided to not recognize (at random) that I had given an order or selected a troop. Oh, I’m sorry. Did you say you clicked heal? Oops, too late, your archer just died. Next time, maybe!

I guess it’s good that at the moment there aren’t that many players to play against, because the pathfinding and missed clicks could really mean the win or loss of a battle. But it is also precisely because there aren’t that many players in multiplayer that I can’t comment much on this aspect. It’s probably that I’m at a weird timezone, but I sat there waiting for players for quite a while with no luck. Apparently, at the hours I was available, no one else seemed to be, so I feel like I missed on a good chunk of the gameplay functionality by being unable to test this part of the game.

This said, the game IS in early access so one can hope that the developers will, in fact, fix all those pesky bugs that make the game difficult to play with, and that this will bring more players into the field because A Year of Rain has plenty of potentials, but it just doesn’t cut it quite yet.